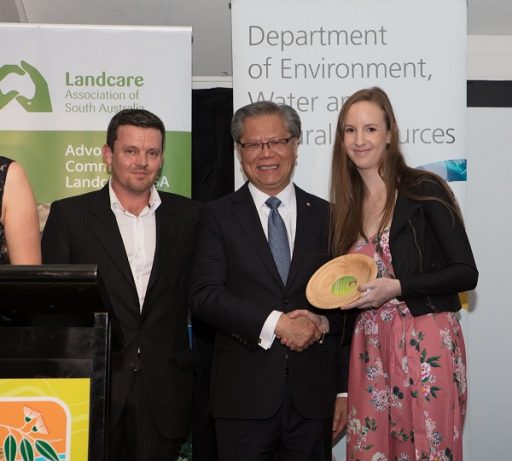 The 2017 South Australian Landcare Awards and the Premiers NRM Excellence Award were presented at the 2017 SA Landcare Conference Dinner at the Clare Golf Club on 12 September.  A crowd of 200 people from across SA attended the event to celebrate the success and achievements of community Landcarers, groups, networks and organisations who have been working to protect and restore our environment and improve sustainable agricultural production.

There was strong competition for each of the nine Landcare Awards categories, reflecting the high level of achievement and enthusiasm by our Landcarers.  The winners from each award category will go on to represent South Australia at the 2018 National Landcare Awards.

Congratulations to the all winners, listed below, for their outstanding achievements and commendations to all finalists and nominees for their efforts and commitment to Landcare.

The 2017 SA Landcare Award Winners are:

The Premier’s NRM Excellence Award, sponsored by the Department of Environment, Water and Natural Resources (DEWNR), was awarded to the Australian Landscape Trust (ALT) for its management of Calperum and Taylorville Stations in the Riverland.  ALT is a non-profit organisation supporting improved management of Australia’s natural resources for the benefit of regional communities and the environment.

Landcare SA thanks all the sponsors of the nine Landcare Awards, as well as DEWNR and Taylors Wines for their sponsorship for the dinner.